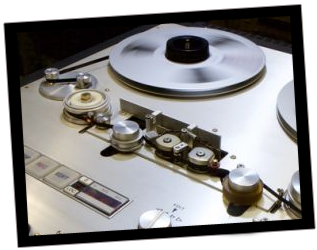 1928 - Dr. Fritz Pfleumer patent in Germany for application of magnetic powders to strip of paper or film.

1939 - independent invention of the wire recorder in U.S. by Marvin Camras at Armour Research Foundation and sold to military during World War II; wire recorders such as the Webster pictured at right were popular with amateurs until the late 1950s.

1941 - The quality of the Magnetophone in Germany dramatically improved with the use of high frequency biasing developed by Weber and Von Braunmuhl at AEG.

1945 - Signal Corps Captain John Mullin found Magnetophones at Radio Frankfurt in Germany and 1000-meter reels of 6.5mm ferric-coated BASF tape with 20-min capacity; he mailed 2 machines to U.S. with 50 reels of tape, and after the war worked on them to improve the electronics.

1947 - Mullin demonstrated Magnetophones to Bing Crosby Enterprises in June. NBC had refused to record his show, Bing moved to ABC with Philco sponsor in the fall, brought with him Mullin's Magnetophones to tape his new season shows and dub to 16-inch transcription disc for broadcast starting Oct. 1 - see Der Bingle Technology article on Bing Crosby.

War of the Speeds

1948 - Columbia introduced on June 21 the first 12-inch 33-1/3 rpm micro-groove LP vinylite record with 23-minute per side capacity, developed by Peter Goldmark in 1947, using players made by Philco.

1947 - Roy Brown recorded one of the earliest "rock and roll" songs Good Rocking Tonight on DeLuxe label, although the name was common in early blues recordings such as Trixie Smith's 1922 My Man Rocks Me With One Steady Roll.

1949 - Todd Storz of Omaha's KOWH created Top 40 after observing customers in a bar play the same juke box selection over and over.

1950 - Muddy Waters recorded Rollin' Stone for the Aristocrat label of Leonard and Phil Chess on Maxwell Street in Chicago, at the end of Highway 61, "the road to freedom" followed by many black blues singers from the Miss. Delta to Chicago. Waters electrified the blues and helped create rock and roll.

1951- Sam Phillips in his studio in Memphis used his Ampex 350 tape machine to record Rocket 88, written by Ike Turner, sung by Jackie Brenston, and sold to Leonard and Phil Chess in Chicago who released it as the 78 rpm Chess record #1458. The sale of this master tape allowed Phillips to start his own Sun Records label.

1953 - Elvis Presley in the summer made his first recording (a personal disc for himself, not for his mother's birthday that was in the spring) at the Sun studio of Sam Phillips in Memphis; the second recording by Elvis at Sun was That's All Right released July 19, 1954, taped on the two Ampex 350 recorders Phillips used to create the "slapback" audio delay that became a trademark sound of Sun records.

1954 - Bill Haley recorded rhythmic Shake, Rattle and Roll and Rock Around the Clock on Decca, due to the success in 1953 of his first national rock hit Crazy Man Crazy on Essex label.

1956 - Elvis Presley recorded Heartbreak Hotel on January 10 in Nashville at his first session for RCA in the RCA Studio on 1525 McGavock Street, and A Big Hunk o' Love June 10, 1958, in the new Studio B on Music Row. According to the Elvis Presley Studio Recordings RCA erased most of its tapes from the 1950s for later reuse, but a good transfer of the original, spliced A Big Hunk o' Love master can be found on the CD "All Time Greatest Hits", PD90100(2)

From Stereo to Cassette

1945 - Paul Klipsch patented the Klipschorn folded horn speaker. The innovations in speakers and amplifiers and tape recorders after World War II contributed to the birth of a"Hi Fi" era that produced stereo and transistor radios and cassette tape players.

1949 - Magnecord added a 2nd head to its PT-6 tape recorder (the mono model was first introduced at the May 1948 NAB show) to create one of the first open reel stereo tape recorders; see tape recorder ads. Willi Studer in Herisau, Switzerland, made his first Dynavox tape recorder that evolved into the Revox A36 by 1953, and after moving to a new factory in Regensdorf near Zurich in 1960, began to produce the 2 and 4-track Revox D36.

1954 - Acoustic Research introduced the small AR-1 bookshelf loudspeaker that used the acoustic suspension principle developed by company co-founders Edgar Villchur and Henry Kloss. This was soon followed by the $89 AR-2 and by the AR-3 with improved domed tweeters in 1958.

question of who made the first such radio.

1957 - May 28 the National Academy of Recording Arts & Sciences was founded in Hollywood by Paul Weston of Columbia, Lloyd Dunn of Capitol, Sonny Burke of Decca, Jesse Kaye of MGM and Henri Rene and Dennis Farnon of RCA Victor, with Jim Conkling of Columbia as its first president, and began to grant the annual Grammy Awards in 1959 for the best recordings and performers of 1958. Tom Stockham received the first Technical Grammy Award in 1994.

1962 - Henry Kloss introduced the KLH Model 11 portable stereo, the first transistorized record player, with the changer/amplifier and two speakers folding into a three-piece suitcase. Kloss had left his previous partner Edgar Villchur at Acoustic Research and founded KLH in 1957 with Malcolm Low and J. Anton Hofmann.

1963 - Philips demonstrated its first compact audio cassette using high-quality BASF polyester 1/8-inch tape that ran at 1-7/8 ips; sold the next year in the U.S. with the Norelco Carry-Corder dictation machine, but the demand for blank tape used for personal music recording was unanticipated by Philips.

1959 - Toshiba in September demonstrated prototype helical scan model VTR-1, with 2-inch tape running at 15 ips over just one head. After the demonstration, Sony began to develop the helical scan VTR.

1961 - JVC (founded as the American-owned Victor Co. of Japan in 1946, but owned by Matsushita since 1953) demonstrated helical scan color VTR with 2 heads.

1964 - Ampex joined with Toshiba to market U.S.-designed VTRs in Japan.

1967 - In March, the Ampex HS-100 color video magnetic disc recorder is used for rapid playback in normal, slow, or stop action, at the ABC "World Series of Skiing" in Vail, Colorado, marking the beginning of "instant replay" on commercial television.

1968 - CBS introduced EVR using film in a cassette; 20th Century Fox agreed to sell movies in EVR; but the format faced growing competition by 1972 from videocassette formats introduced by RCA, Sony, Ampex and Avco, all seeking to develop a new consumer market for home VCRs.

1969 - RCA demonstrated SelectaVision that played pre-recorded cassettes but did not record.

1969 - Sony introduced first videocassette, the 3/4-inch U-Matic one-hour tape, available in U.S. by 1971. For the first time, Sony allowed other manufacturers to sell machines that could play the cassette, and thus succeeded in establishing a world standard for the 3/4-inch videocassette.

1970 - Ampex introduced the Instavision that it had developed with Toshiba; N.V. Philips introduced its own videocassette recorder (VCR) format in Europe; AVCO introduced a solid state compact Cartrivision VCR.

1972 - Sears and Wards sold CartriVision, but too many competing VCR formats caused all to fail by 1973.

1975 - Sony introduced in November in the U.S. the Betamax consumer VCR (console only) for $2295 with one-hour 1/2-inch tape cassettes for $15.95. Sony sought to created a standardized format, as it had done with the U-matic in 1969, by getting 7 other companies to agree to produce machines that would play the Beta cassettes.

1976 - Sony introduced a Betamax VCR deck for $1300 and began aggressive advertising claiming that it "can actually videotape something off one channel while you're watching another channel" and "build a library of your favorite shows." MCA/Universal and Disney filed lawsuit finally won by Sony in 1984.

1979 - Sony introduced the TPS-L2 Walkman portable audio cassette player, inaugurating a new era of personal music listening; the Sony family of portable personal music players would grow to include over 500 models, from the original pocket-sized 14-oz Walkman to the D-88 Pocket DiscMan of 1988 to the DAT Walkman TCD-D3 of 1991 to the MiniDisc of 1992 to the digital Discman of 1999. According to Sony's press release, in the 20-year history of the Walkman devices, 100 million units were sold in the U.S. creating a $1 billion industry. By 1983, more pre-recorded audio cassettes (236 million) were sold than LPs, a decline in the big vinyl discs that was accelerated in the 1980s by the compact disc digital revolution.

1985 - Sony introduced the 8-mm format in April; the VHS group, led by JVC, brought out a compact version of VHS, known as VHS-C, but it only recorded for 20 minutes.

1988 - Super-VHS video format equalled 8-mm in picture quality but not in sound quality.

1985 - Sony and Philips produced the standard for Compact Disc Read Only Memory (CD-ROM) computer discs that would use the same laser technology as the audio CD.

1988 - for the first time, CD sales surpassed LP sales, leaving CD and cassette as the two dominant consumer formats; more than 1/2 of TV households own a VCR; the first transatlantic fiber-optic cable carried up to 37,000 telephone transmissions and began to replace satellites for telephone communication.

1995 - By September, all companies in the DVD consortium agreed to DVD standards.

1997 - San Diego's MP3.com was founded in November by Michael Robertson; Another digital pioneer company was founded in San Diego in August 1998, Packetvideo, that became a leader in cell phone mobilemedia.

1998 - Aug. 6 the first HDTV set went on sale for $5,499 to the public in San Diego, a 56-inch Panasonic set that was developed at the company's research and development center in San Diego and manufactured in Tijuana.

1999 - TiVo and Philips announced March 31 in a press release shipments of "the first personal TV system."

2004 - The first HD car radio was sold Jan. 5 in Cedar Rapids, Iowa, according to the iBiquity Digital Corp. press release, "the biggest revolution in radio since the advent of FM broadcasting more than fifty years ago."